At SFT-India we organize a range of programs including youth leadership trainings to empower Tibetan and Indian young people to become effective change-makers, and outreach programs to introduce Indian and other non-Tibetan youth to the Tibetan freedom movement. 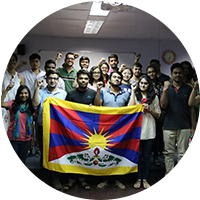 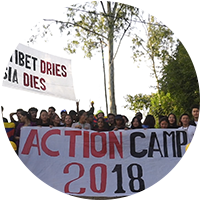 SFT-India organized its first Free Tibet! Action Camp in 2006, with a host of trainers from our International Office in New York. In the fall of 2013 we organized our first Action Camp with an all-India team. We believe this is a testimony of the power of nonviolent resistance training. All our trainers at the 2017 Free Tibet! Action Camp have been through rigorous SFT strategic nonviolence and leadership building trainings, and are today confident trainers themselves. 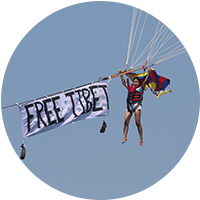 Direct action means taking action yourself to create social change. Direct action is about recognizing your power as an individual - or group of individuals - to create meaningful change in the world, rather than relying on others.

During Chinese leaders visit to India, we make sure they are held accountable for the genocide inside Tibet. 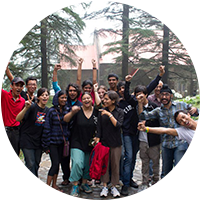 Since 1960, when Dharamshala became the temporary headquarter of His Holiness The Dalai Lama, it has risen to international fame as “The Little Lhasa in India”. SFT is providing opportunities for students all across the world to explore the magnificent land of Buddhism. International students are joining SFT for the Annual flagship program which is normally held in June. SFT-India did a photo action at Mcleod Ganj to commemorate the bloody massacre of Tiananmen square 31 year back. After three decades, we still stand here as proof of the CCP’s brutality toward the people who ask for democracy. However, people still commemorate this symbolic day all around the world as a testimony to the fact that no matter how much the CCP tries to censor, erase and rewrite history of the bloody massacre, they’re never going to succeed.  SFT demand that CCP should be held accountable for the murder of tens of thousands of peaceful pro democracy student protestors and  International community must call out China for all the atrocities in the occupied countries East Turkestan, Southern Mongolia, Taiwan, Hongkong and Tibet. The Human Library is a place where real people are there to readers. A place where difficult questions are expected, appreciated and answered.

SFT India organized the program called Human library which aims to bring knowledge to life literally. It aims to showcase the unique culture and movement of Tibetan. What do you want to know about Tibet? What characteristic about Tibet intrigued you to know more?

It aims to build deep connections with listeners or audiences by taking them back in history by storytelling. Lhakar movement, a non-violent, non-cooperation movement of civil resistance started from Tibet. Lhakar, meaning ‘White Wednesday.’ It is a significant day to Tibetans as it is the day the Dalai Lama was born, known as his ‘soul day. Lhakar is about celebrating Tibetan culture and engaging in civil resistance. Through this movement, we aim to restore, renovate, and keep our language, culture, identity and tradition. At the same time, it is to show the world the unique and rich culture and tradition that CCP is trying its best to extinguish. SFT India’s Lhakar film series aims to use this beautiful  medium that engages our minds and emotions and invites us to participate in a story in ways that spoken or written words cannot. It is a great way to raise awareness and get people involved in discussion related to it. We believe every individual has the right to be free. Those who enjoy freedom have the power and also the responsibility to make positive change in the world.

We seek to create opportunities to inspire, enable and motivate all people to see that change is possible. WAs we  value creativity in every pursuit, and we believe it is essential to  work towards our vision of a just and equitable world. 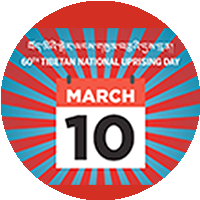