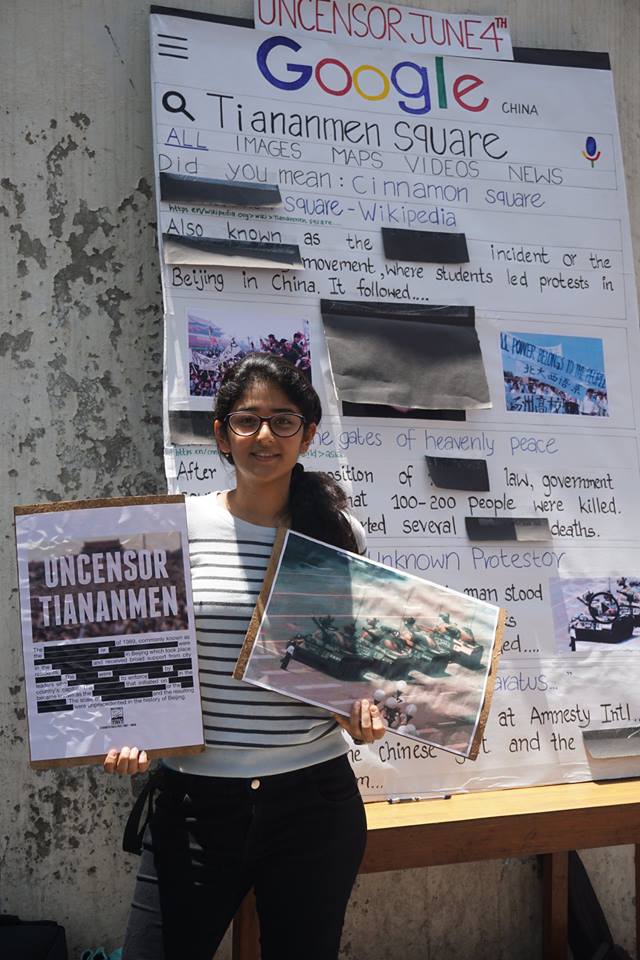 Dharamsala, June 4: Tibet activists in Dharamsala organised an event “Uncensor June 4” to commemorate the 28 anniversary of the June 4th Tiananmen Massacre. The event was marked to show solidarity with the democracy activist and victims of the massacre. In April 1989, thousands of students, workers and others in China took part in a peaceful gathering at Tiananmen square calling for freedom of expression, accountability and end to corruption. Each passing day, the group was joined by large number of people from various cities. With the thousands of people at the square, on June 4, the Chinese government brutally suppressed the peaceful demonstrators. The military opened fire and killed untold numbers of peaceful demonstrator and bystander. Many were crushed under military while sleeping in their tents set at the square. After the killing, the Chinese government implemented a national crackdown arrested thousand for “counter revolutionary” and other criminal charges.

“Every year we commemorate this day to show our solidarity with the democracy activists and the victims of the Tiananmen massacre. Like the 1959 Tibet occupation, the Chinese government have played their every card to erase this massacre from public memory, which is why it’s so important for us to speak about this issue and expose CCP brutality”, said Tenzin Tselha, National Director at Students for a Free Tibet-India. “On this anniversary of the Tiananmen Massacre, we want to reiterate the unreasonable magnitude of the censorship apparatus run by the Chinese government and its restrive hold on information and opinions. In this day and age of internet and easy access, suppression of freedom of speech is direct violation of basic Human Rights. Such censorship defeats the essence of Democracy. Thus, this 4th June, we pledge to fight for freedom of speech and freedom of press for all,” said Khushbu Shah, intern at Students for a Free Tibet-India.