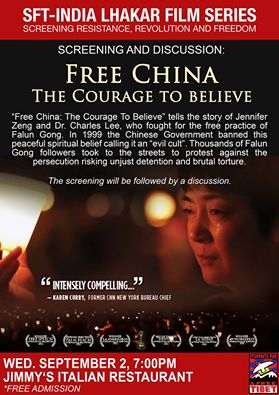 On Wednesday, 2 September 2015 we showed the movie “Free China: The Courage To Believe”. The famous filmmaker Kean Wong visualizes in this documentary the fight of the Falun Gong practitioners Jennifer Zeng and Dr. Charles Lee for their right to religious belief and practice in China.

At the same time Dr. Charles Lee, a Chinese American businessman got arrested for broadcasting uncensored information on state controlled television. Despite having the awareness of facing years in prison and brutal torture, he exposed the truth about Falun Gong across China.

By calling it an evil cult the Chinese Government started the persecution of Falun Gong and detained thousands of its followers. The punishments for the practitioners were torture, forced labor and organ harvesting. As the repression of Falun Gong practitioners grew stronger, their resistance did so as well. Their response to the propaganda program of Falun Gong by CCP were daily protests on the Tiananmen Square in Beijing, spread of books and DVDs about Falun Gong through the internet and establishments of several international media organization such as NTDTV and The Epoch Times.

The screening was followed by a vivified discussion. The audience brought up topics as the importance of the people living inside China and Tibet to come together for the Tibetan movement. The combination of resistance inside and outside of Tibet will make the biggest impact on change of the current situation. Furthermore we discussed about the information channel between Tibet and the exile community and how communication under these restricted circumstances works. After the session people continued talking about the Tibet issue. There were many questions and we are glad that the audience used this platform to exchange their ideas and thoughts.