7 Reasons the Future of Our Rivers is at Stake 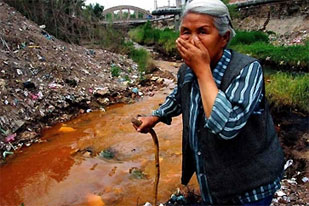 As rivers all over the world are under serious threat due to heavy damming, deforestation, mining, increased consumption for industrial activities and agriculture, the situation in Tibet is no different. However, it is the Chinese government that is reaping the benefits of Tibet’s generous bounty, while the local Tibetans are deprived of their own resources. Read on to find how China is depleting and polluting Tibet’s rivers and the consequences it will have for the rest of Asia:

1.The Future of the Brahmaputra as we know it, is uncertain: The Brahmaputra or Yarlung Tsangpo is one of the highest, most powerful flowing major rivers in the world. Originating in the Angsi glacier in Tibet, the waters of the Tsangpo are shared by Tibet, India (middle riparian) and Bangladesh (lower riparian), supporting millions of farmers, fisheries, and livelihoods before draining into the Bay of Bengal. On 13th October 2015, China’s controversial Zangmu dam became fully operational on the upper reaches of the Yarlung Tsangpo.  Experts have raised fears that the functioning of the dam may trigger devastating floods in Assam during the rainy season and dry up the river in winter. This in turn, will have a serious impact on agriculture and fishing in the downstream areas as the salinity of water will increase. Also, the dammed water will be used to power nearby mining operations, which means pollution from gold, silver, copper and other heavy metals from mining operations could easily find its way back into the Tsangpo, with dire consequences downstream.

2. The waters of the Yangtze got so polluted they turned red: The longest river in Asia and the third longest in the world, Yangtze originates in Tibet, before flowing through southwest, central and eastern China. The fact that it has its origin in Tibet, a country forcibly occupied by China negates the argument that it is the longest river to flow entirely within a single country. The Yangtze basin is home to one third of the world’s population, however, it has become so polluted that in September 2012, the waters of the river turned red near Chongqing, Southwest China.

3. Waters of the Mekong are being used to flood and parch downstream nations at will

Originating in the Kham region of Tibet, the Mekong makes its way through the Yunnan province of China, before forming the border between Thailand, Laos and Myanmar, after which it flows through Cambodia and Vietnam, before draining into the South China Sea. The river is heavily dammed on the Chinese side, with 7 dams already constructed and 21 more either under construction or planned. Not only that, China is also financing large dams in the lower riparian countries of Cambodia and Laos. As a consequence, the Mekong region is suffering from its worst drought in five decades. In fact, water levels are so low that the turbines in dams such as Jinghong cannot even operate. This has resulted in shortage of clean water in downstream countries as well as an alarming decline in fish production. China has also been blamed for the devastation caused to hundreds of communities downstream when it released water from its three hydropower dams in August 2008.

4. Government vs Citizens for the Salween: Originating in central Tibet, the Salween River feeds China, Burma and Thailand, finally merging with the Andaman Sea. The river is known for supporting several kinds of biodiversity, with the upper basin being home to 25% of the world’s animal species and being a World Heritage Site. Once known as the longest free flowing river, the river now has a dam just 5.5 km from the World Heritage Site, with many more to follow suit. Creating dams on the Salween would encompass flooding hundreds of settlements, while the lower riparian states would experience seawater entering inland, thus making the downstream areas unsuitable for agriculture. What is surprising is that in addition to Burmese and Thai activists, Chinese locals have also been protesting the dam projects, which has largely been considered as a forced military thrust.

5. The Yellow River – Cradle to Coffin? Considered to be the cradle of Chinese civilization, the Yellow River begins in northern Kham (Tibet) and flows for a length of 5464 kms through China. Although the river is pristine clean along its headwaters, it becomes one of the most polluted rivers by the time it makes its way across the central and eastern parts of China. Today, the river is dry in its lower reaches for most part of the year. One third of the waters have been rendered a grading of worse than level 5, meaning it is unfit for consumption, as well as for agriculture and industrial activities. This is due to the large amount of sewage and waste that finds its way into the water body.

6. Damming and Diversions galore on the Yalong:

The largest tributary feeding the Yangtse, the Yalong River has its source in the Amdo region of Tibet. Sadly, it is among the most heavily dammed rivers in the world and worse, there are also plans for a massive water diversion project for Yalong, from the Yangtse to the Yellow River, which is drying up at a startling rate. This is only a preview of the damage that can be wreaked on the rivers of Tibet.

7. China controls rivers that do not even originate in its territory: The Irrawaddy River, the longest in Burma originates in a disputed territory on the Burma-Tibet border. There have been talks of building dams along the river in Burma, and although the plan had been shelved, China has called on Burma to restart the project. There is activity at night at the Mysitsone site of the proposed dam, and gold-mining and logging operations continue aggressively at nearby locations. There are several other Chinese financed dam projects underway in Burma. One would assume that the output from these dams will go to the poor villages of Burma, but sadly, even the power generated is meant for China.