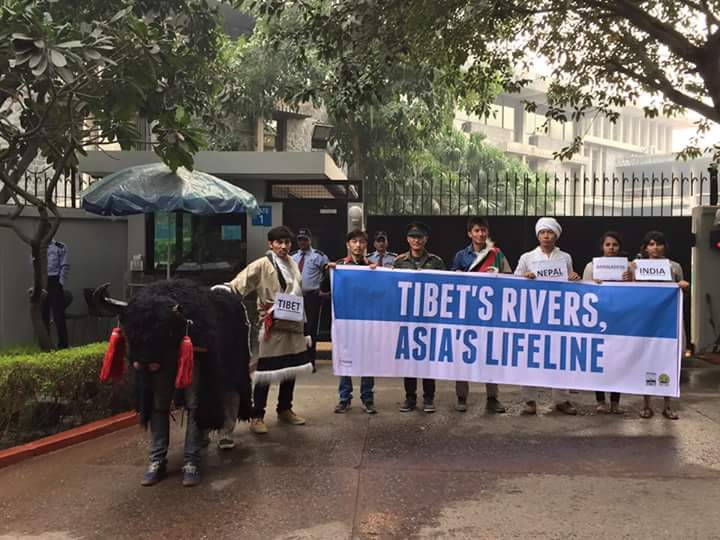 The Tibet Third Pole Coalition comprised of Tibetan Women’s Association, Students for a Free Tibet-India and International Tibet Network organised a week of various activities and events in Delhi and Dharamhala to spotlight the climate crisis in Tibet in the lead up to the UN COP21 summit happening now in Paris. We started with a week of lobbying with representatives of the 11 downstream countries that are dependent on Tibet’s rivers for their survival. We were successful in meeting with the third secretary of the Embassy of Nepal, and with Shri Jairam Ramesh, MLA and former Minister for Environment and Forests. We also met with Mr. Anthony Eterno, Global Affairs Counsellor at the US Embassy and with Mr. Lachlan Scully, Political Affairs Counsellor at the Australian High Commission. We updated them on the urgent need for Climate Action for Tibet, and our push for forming a multilateral forum of downstream countries to hold China accountable.

On Friday November 27, we carried out a street theatre in front of the United Nations Office in New Delhi with the participation of SFT Delhi members. Members from Tibet Third Pole Coalition managed to meet with the Information Officer at the UN, and handed over Australia Tibet Council’s report Tibet: Environmental Challenges to the Secretary of the UN Resident Coordinator. On Sunday November 29 we organised a large Tibet Climate Action Rally in New Delhi from Rajghat to Jantar Mantar, with over 300 Tibetans, Indians, students, shopkeepers, business people, men, women, children joining thousands around the world calling for responsible and urgent climate action. We were successful in highlighting Tibet, both as a geographic place and a people, at the frontline of experiencing the worst impacts of climate change. In Dharamshala we organised a political theatre at the Mcleodganj main square, showing the various aspects of climate change and environment destruction occurring in Tibet thanks to China’s systematic so-called ‘development policies’ – forcible resettlement on Tibetan nomads, damming diversion of Tibet’s rivers, semi-legal and illegal mining of Tibet’s natural resources.