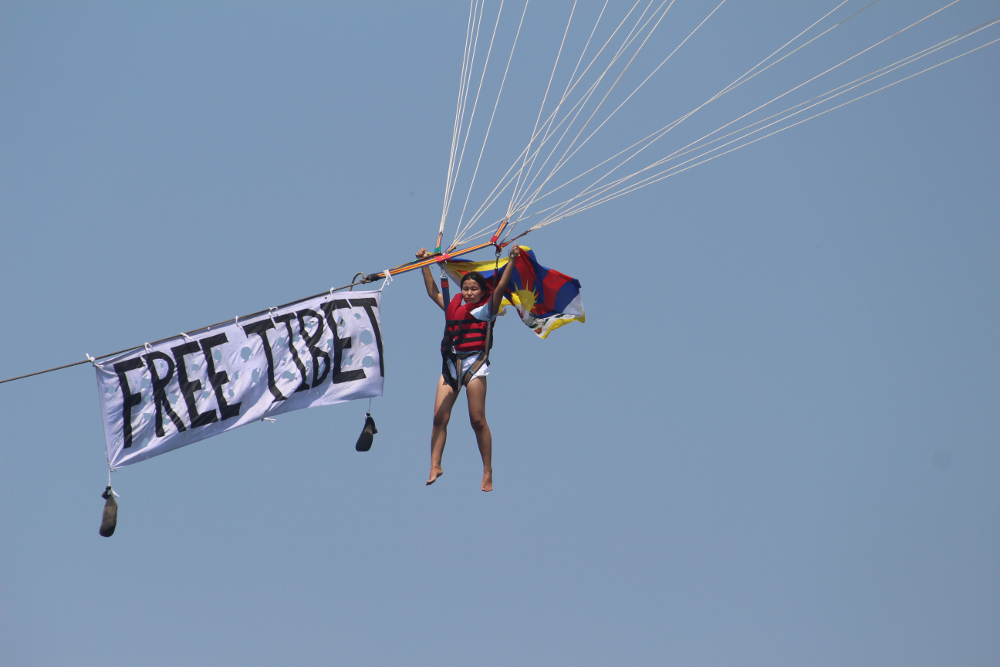 Activist from Students for a Free Tibet India staged a bold protest against Chinese president Xi Jinping during the 8th BRICS Summit in Goa. The summit marks his second visit to India in the last three years.

A night before Xi’s arrival in Goa for the summit, activist from SFT India protested by throwing eggs at his poster and official banners covering it with black paint. The protest was followed by another action  at the popular western coast of Goa where Tenzin Dhasel, 20 year old Tibetan woman, parasailed with Tibetan National Flag and a Free Tibet banner. She said, “I did this action to protest Xi Jinping who is responsible of all the Human Rights violations in Tibet. Over 144 Tibetans have self immolated to protest illegal Chinese Rule in Tibet and called for Freedom and return of His Holiness the Dalai Lama. Tibetan Non Violence movement will continue until we end the illegal occupation of Tibet by China.”

Earlier on the day, 15 mins after Xi Jinping landed at Dambolin airport, five activists staged a protest raising slogans of “Tibet’s Independence India’s security”, “Stop Demolition of Tibetan Monastery Larung Gar by Chinese Govt”. The five activists were arrested and taken to Vasco police station. This was to highlight the plights of Tibetans inside Tibet under the illegal Chinese colonial occupation.

The day before Chinese President Xi Jinping’s arrival in India for the BRICS summit, Tibet activists kicked off their protest by unveiling(1) a 6ft  by 2ft  banner on the popular western coast of Goa where the conference is to be held on 15 and 16 Oct 2016. The banner read “Xi, Free Tibet Now.”

The BRICS Summit comes on the heels of unprecedented environmental crisis in Tibet due to China’s construction of mega dams on Tibet’s rivers and illegal mining activities which have caused a major threat to India and other downstream countries whose survival depends on Tibet’s rivers.(2) On the other hand the human rights situation in Tibet has worsened dramatically in recent years, as fundamental rights to freedom of expression, peaceful assembly, religion and privacy have been severely restricted. In July 2016, large-scale demolition of monks’ and nuns’ homes (3) at one of the world’s largest monastic institutions, Larung Gar in eastern Tibet (Ch: Ganzi Tibetan Autonomous Prefecture, Sichuan Province), commenced under Chinese government orders. The demolitions at Larung Gar have caused distress among the residents of Larung Gar and the wider population of Tibet.

After 67 years of illegal occupation of Tibet (4) by China, Tibetans in Tibet continue to resist Chinese rule through nonviolent protests, including the recent self-immolations of 144 Tibetans (5), the vast majority of which took place under Xi’s presidency.

“Prime Minister Modi should hold a strong position now and bring the issue of Tibet into discussion to raise our voice and concerns during his meeting with (Chinese President) Xi Jinping at the BRICS conference. There cannot be lasting peace in the region without addressing the issue of Tibet. Tibet’s independence is the only way to ensure India’s security,” Tenzin Tselha, National Director of Students for a Free Tibet-India.

“India got it’s independence 70 years ago from British rule, and the freedom I enjoy today is due to the sacrifice of our Indian freedom fighters. Therefore, I joined the Tibetan nonviolent resistance for freedom, which is their birthright, and India should stand with them in their fight for truth and justice,” said Pranav SFT Goa Member.  “As an Indian I am also very concerned about China’s systematic damming of Tibet’s rivers and extensive water diversion projects which will have devastating consequences for India. I call PM Modi to take a strong stand and raise the Tibet issue with Xi Jinping. Only Tibet’s freedom can ensure lasting peace in the region.”