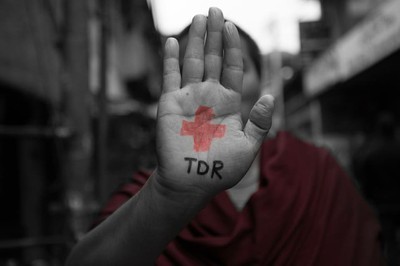 April 7, 2015 marked 13 years since Tenzin Delek Rinpoche’s arrest. Rinpoche is a respected Buddhist teacher and Tibetan community leader who has been a prisoner of the Chinese state. Every day he spends in prison is one day too many. On April 7, SFT and Tibet groups took  action to call for Tenzin Delek’s  immediate  release. We joined his family  and students across the world to create  the public  attention this campaign  deserves and urged governments to  push China to release  Tenzin Delek  Rinpoche.

Tenzin Delek Rinpoche was charged with  “causing explosions” and “inciting separatism”, charges for which no evidence has ever been provided and he has steadfastly maintained his innocence. His original trial (December 2002) was not held in accordance with international fair trial standards and he was denied the right to be represented by lawyers hired by his family. Our chapter in Delhi observed a Candlelight Vigil from the Tibetan settlement in Majnu-ka-Tilla to Delhi University North Campus, collecting signatures along the way. SFT Bangalore carried out a signature drive in college campuses around Bangalore. Our Campaigns Director, along with Ven. Lobsang met with representatives of various Embassies in New Delhi, including the European Delegation, Japan, United States of America, Austria, Germany, Switzerland, Australia, and the United Nations Information Desk.