LONELY ARE THE BRAVE | A Tribute to Shokjang 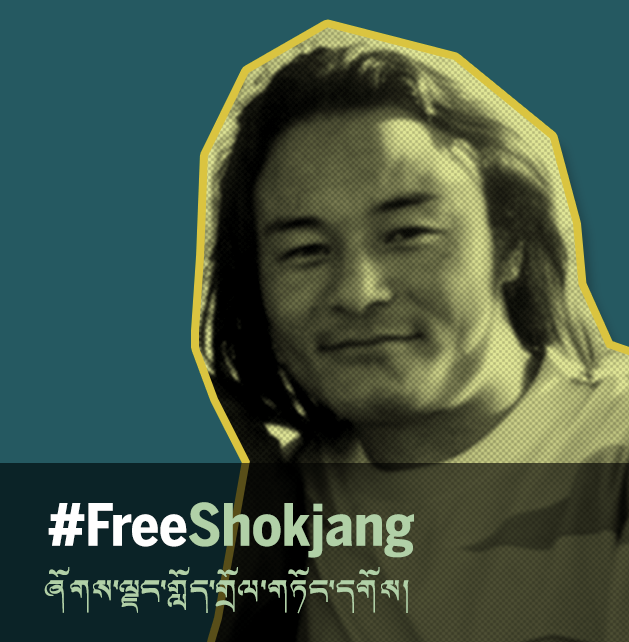 A few days ago, Tibetan exile media organisations carried reports of the sentencing of Shok-jang to three years in prison. According to Tsering Gyal, Shok-jang was arrested on 16 March 2015, a few days after the 56th anniversary of the 10 March Tibetan National Uprising Day of 1959. He was arrested for sending out this short report to the outside world:

“Gun-toting soldiers have surrounded Rebgong. They are frisking the Tibetans. Is this meant to protect public security? Or is this a deliberate ploy to provoke the people? If this is how they create so-called social stability, how extremely terrifying this act is?”

This is not the first time, however, that the Chinese secret police had detained Shok-jang. According to Theurang, another writer who was released in March 2014, after serving four years in prison, Shok-jang was arrested along with him for the first time in April 2010. Although RFA reports that the Chinese accused them of having links with the Tibetan Youth Congress in Dharamshala – a euphemism for seeking Tibetan Independence – the immediate cause that led to their arrest was their role in starting the literary journal Shar Dung Ri, named after the famed snow mountain in Shar-Khog, Amdo. The journal, now banned, published articles, poems and essays by Tibetan writers, including Shok-jang. It savagely condemned, among others, China’s violent suppression of the 2008 Tibetan Uprising. The journal, a few original copies of which I have had access to, was edited by one Don (Devil) and co-edited by Tson Ma (Prisoner). Shok-jang, pen-name, was born, most probably in 1984. His real nam is Druk-lo (Year of the Dragon). he is from Gengya, Labrang, Amdo. Traditionally, Labrang is referred to as “the seat of knowledge”. Great minds, includng Gedun Chophel, once studied there. A poet, lyricist, short story writer, essayist, he is the author of four books: A Courageous Path; The Might of the Pen; For Liberty, I have no regrets and Rangdrol’s Courage, dedicated to the late poet, short-story writer and scholar Dondrub Gyal. As we can see from the titles of these books, Shok-jang is a courageous and visionary Tibetan intellectual. He is well-read in Tibetan literature and through Chinese translations, literatures of other countries. He is therefore a “native son” of the Land of Snows, but his ideas are not confined to Tibet and the Tibetan people; they have universal resonance.

Shok-jang is filled with deep love for the Tibetan people. His goal is to seek liberty, for which he is determined to pay a price, including imprisonment, as he has shown. He knows well, however, that his own individual liberty is inextricably linked with Tibet’s national self-determination. He once wrote:

“Like all nations, Tibet also has the right to national self-determination. Tibetans cannot avoid this path. If you say you don’t want even this (right) then you are seeking a life of slavery.” But how can Tibetans seek national self-determination given the rise of China under Xi Jinping? In a powerful letter Shok-jang sent to his friend Theurang, when the latter was in prison, from the “ancient fortress of Xining on the midnight of 15 August 2012,” he attempts to answer this question:

“Yesterday, on 12 August at six thirty pm, two Tibetans burned themselves to death. Following this, Tibetans and the Chinese soldiers had a severe fight over the control of the corpses. The Chinese soldiers fired on the Tibetan protesters, killing one of them. Again around 8 pm, another Tibetan burned himself. This has shaken hither and thither the minds of all Tibetans. The red-Chinese are carrying out violent repression everywhere. I have heard news about Tibetans protesting, but I was not able to actually go there. Thinking about the actions of these brave men and women for the cause of justice, i couldn’t do anything but remain standstill in shock and awe. Dear friend, if you were here, I don’t know what action you would take. After you all left, like the proverbial lotus in the sky, hardly any one among us penholders (writers) were willing to speak the truth; maybe they were watching with their keen, intelligent eyes, but as far as expressing their feelings through words, I have not seen anyone (doing so). I believe there are one or two tigers and dragons hiding in their dens, but is it our fate to be stuck with one or two individuals all the time? Thinking over and again, (made me realise) that this nation of peace has hardly any intellectuals. If we too had a Socrates who never showed any mercy to tyranny; if we too had a Nelson Mandela, who never bowed to violent repression; if we had writers who could pen the joy and suffering of the masses honestly, would these brave men and women who could burn themselves in the red fire have to leave alone?”