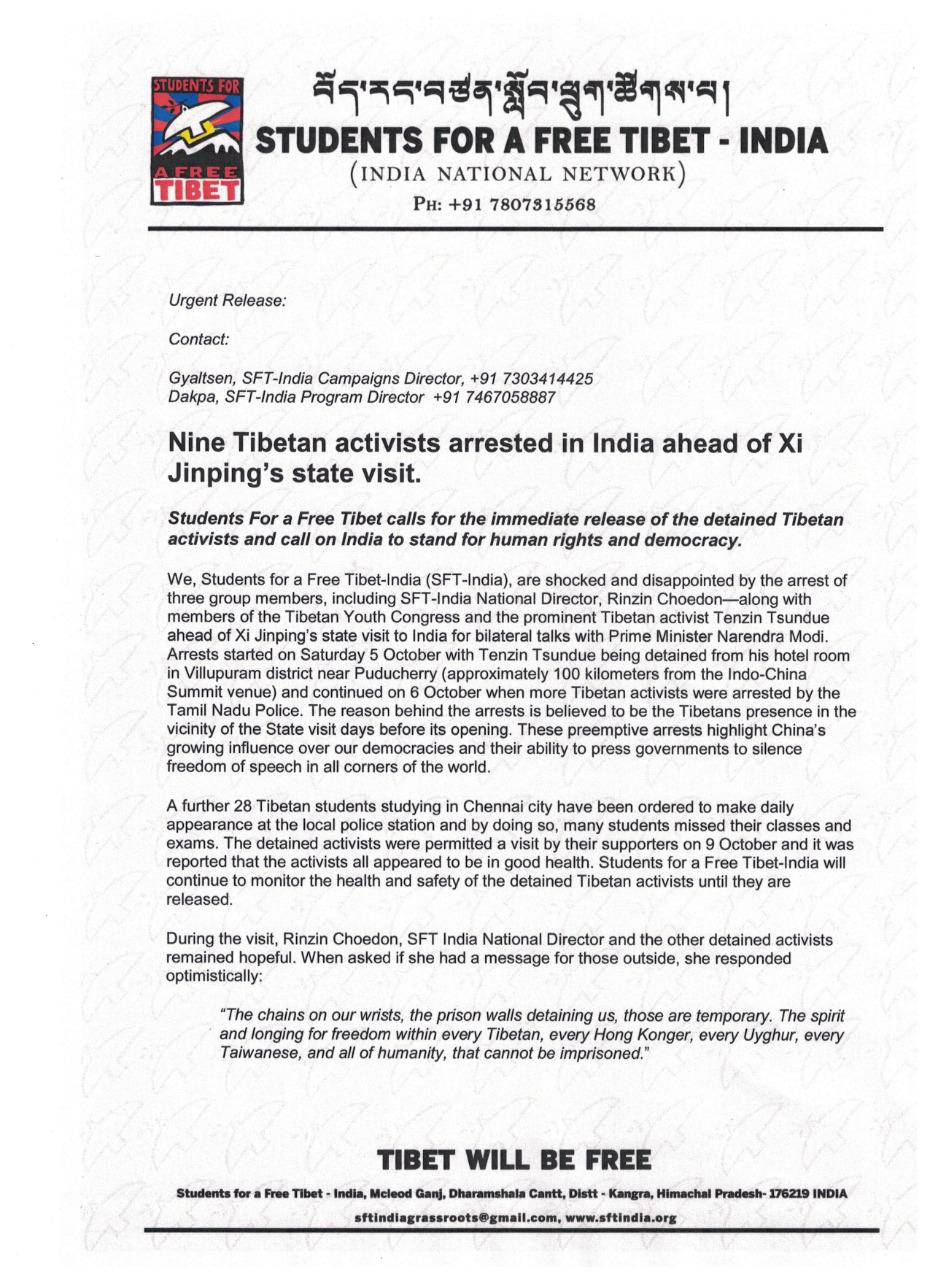 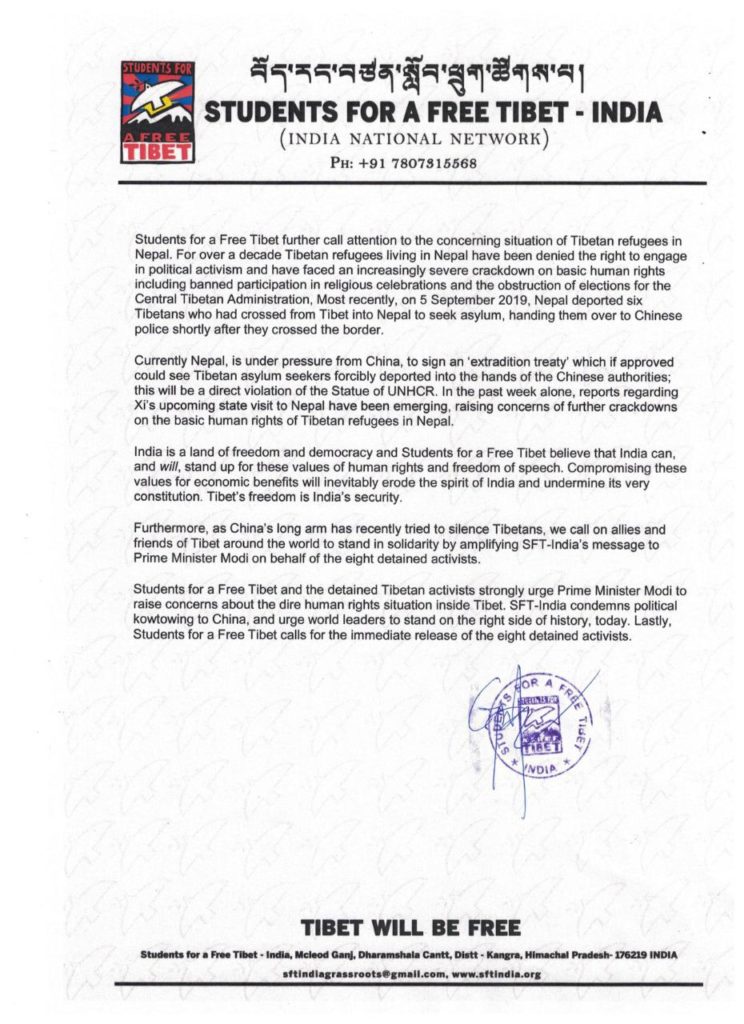 Students For a Free Tibet calls for the immediate release of the detained Tibetan activists and call on India to stand for human rights and democracy.

We, Students for a Free Tibet-India (SFT-India), are shocked and disappointed by the arrest of three group members, including SFT-India National Director, Rinzin Choedon—along with members of the Tibetan Youth Congress and the prominent Tibetan activist Tenzin Tsundue ahead of Xi Jinping’s state visit to India for bilateral talks with Prime Minister Narendra Modi. Arrests started on Saturday 5 October with Tenzin Tsundue being detained from his hotel room in Villupuram district near Puducherry (approximately 100 kilometers from the Indo-China Summit venue) and continued on 6 October when more Tibetan activists were arrested by the Tamil Nadu Police. The reason behind the arrests is believed to be the Tibetans presence in the vicinity of the State visit days before its opening. These preemptive arrests highlight China’s growing influence over our democracies and their ability to press governments to silence freedom of speech in all corners of the world.

A further 28 Tibetan students studying in Chennai city have been ordered to make daily appearance at the local police station and by doing so, many students missed their classes and exams. The detained activists were permitted a visit by their supporters on 9 October and it was reported that the activists all appeared to be in good health. Students for a Free Tibet-India will continue to monitor the health and safety of the detained Tibetan activists until they are released.

During the visit, Rinzin Choedon, SFT India National Director and the other detained activists remained hopeful. When asked if she had a message for those outside, she responded optimistically:

“The chains on our wrists, the prison walls detaining us, those are temporary. The spirit and longing for freedom within every Tibetan, every Hong Konger, every Uyghur, every Taiwanese, and all of humanity, that cannot be imprisoned.”

Students for a Free Tibet further call attention to the concerning situation of Tibetan refugees in Nepal. For over a decade Tibetan refugees living in Nepal have been denied the right to engage in political activism and have faced an increasingly severe crackdown on basic human rights including banned participation in religious celebrations and the obstruction of elections for the Central Tibetan Administration, Most recently, on 5 September 2019, Nepal deported six Tibetans who had crossed from Tibet into Nepal to seek asylum, handing them over to Chinese police shortly after they crossed the border.

Currently Nepal, is under pressure from China, to sign an ‘extradition treaty’ which if approved could see Tibetan asylum seekers forcibly deported into the hands of the Chinese authorities; this will be a direct violation of the Statue of UNHCR. In the past week alone, reports regarding Xi’s upcoming state visit to Nepal have been emerging, raising concerns of further crackdowns on the basic human rights of Tibetan refugees in Nepal.

India is a land of freedom and democracy and Students for a Free Tibet believe that India can, and will, stand up for these values of human rights and freedom of speech. Compromising these values for economic benefits will inevitably erode the spirit of India and undermine its very constitution. Tibet’s freedom is India’s security.

Furthermore, as China’s long arm has recently tried to silence Tibetans, we call on allies and friends of Tibet around the world to stand in solidarity by amplifying SFT-India’s message to Prime Minister Modi on behalf of the eight detained activists.

Students for a Free Tibet and the detained Tibetan activists strongly urge Prime Minister Modi to raise concerns about the dire human rights situation inside Tibet. SFT-India condemns political kowtowing to China, and urge world leaders to stand on the right side of history, today. Lastly, Students for a Free Tibet calls for the immediate release of the eight detained activists.