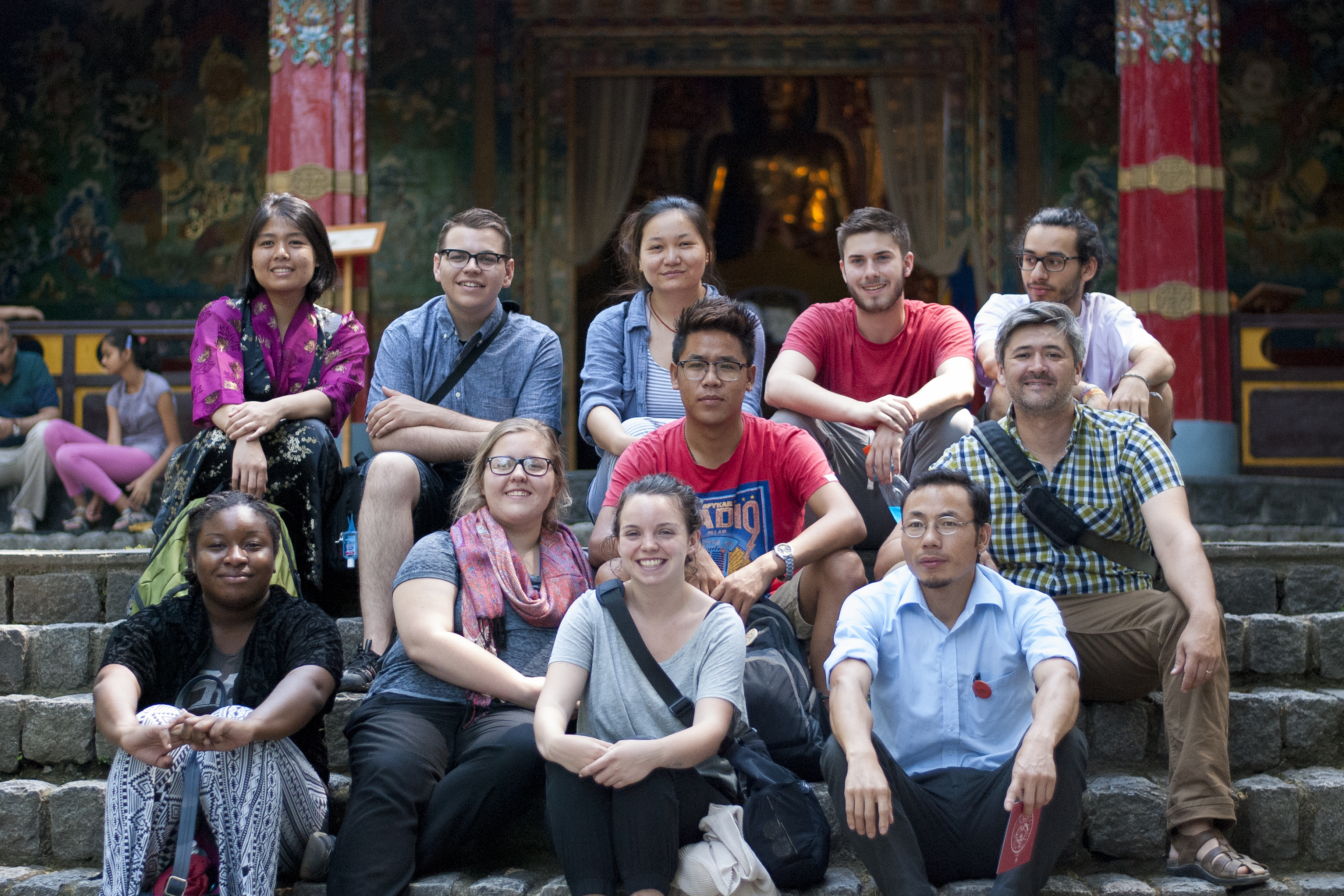 Last week, we hosted a group of 11 students  from American  University in Washington DC.  Mostly in their first or second  year of college,  the students came from a variety of academic  backgrounds, including international relations,  Chinese  studies, human rights, and conflict  resolution. Most arrived  with little knowledge  of Tibet beyond what they learned  during a  brief program orientation. During their 8-day  visit,  they had the opportunity to meet  activists, artists,  intellectuals and community  leaders, each of whom gave them a different perspective on the Dharamsala community and the Tibetan Freedom Movement.

On their first morning in Dhasa, the students visited Tsuklakhang. After spending the rest of the morning exploring Dharamsala on their own, Jyotsna gave the students an introduction to the Tibetan Freedom Movement with a screening of Leaving Fear Behind, Dhondup Wangchen’s film about repression in Tibet before the Beijing Olympics. The next day, the students had the opportunity to delve further into the Tibetan Freedom Movement with a discussion with activist and poet Tenzin Tsundue. In addition to helping the students understand the politics of the movement, he left them with some unexpected advice: spend some time in jail! We began their fourth day with a visit to the Tibetan Institute of Performing Arts (TIPA). The students were impressed by the manner in which TIPA straddles contemporary and traditional performances. They also had a lot of fun trying on traditional hats! After a nice lunch at Dharamkot, the students met with ex-political prisoner Gonpo Thinley. We woke up early the next day to head to Norbulingka and Dolma Ling Nunnery. The students were particularly interested in Tibetan feminism in Dharamsala, so it was great for them to hear about the nuns working towards their Geshe degree from the Director, Dolma Ling Nunnery Rinchen Khando. They got to hear another perspective on Tibetan women when they visited Tibetan Women’s Association the next day. Day seven was another busy day, with visits to Men-Tse-Khang, Tibetan Children’s Village school, and the Library. The visit to Men-Tse-Khang raised a lot of questions for the students about the relationship between Tibetan medicine and Western medicine. At TCV, the students had the opportunity to interact with senior school students, and engage in English language conversation practice sessions.

On their last day with us in Dharamsala, the students talked with PhD student Dawa Lokyitsang. Dawa helped the students to contextualize and complicate the narratives that they had heard over the previous 8 days. She talked to the students about a wide range of issues, including the relationship between Indians and Tibetans in exile and Tibetan feminism. We ended the talk with a reflection: what did they expect before coming to Dharamsala and how were those expectations either met or subverted? Having come from a wide variety of backgrounds, the students had all arrived in Dharamsala with different expectations and intentions. Many were more surprised by the similarities between Tibetans and themselves than the differences. As few had come with extensive experience with the Tibet issue, they found ways to connect what they learned to their own specialties, whether it was Islam in China or the effects of Western education on indigenous communities. Although their stay was brief, we really enjoyed showing the American University students around Dharamsala! In just 8 days, we saw enormous growth in the students as they grappled with the Tibetan freedom movement and the history and politics of the community. We look forward to seeing how the students engage with Tibet in the future!