SECURE THE PAST – SHAPE THE FUTURE

Every country marks significant historical dates from its founding as a nation. Regardless of its current political status, Tibet—consisting of Amdo, Kham, and U-Tsang—is no exception. Students for a Free Tibet (SFT) has set aside February 13th as an important day to commemorate the nation’s independent past. For occupied countries, observing an independence day is a powerful expression of the people’s desire for freedom.

On February 13, 2013, SFT celebrated the Centennial of the 1913 Tibetan Proclamation of Independence. From then on, SFT has observed the Tibetan Independence Day, and it is now celebrated in over 30 cities worldwide. Each year, SFT chooses an aspect of Tibetan history to highlight its independent past. The themes were Legacy of the Tibetan Empire in 2014, the Tibetan Flag in 2015, Reclaim Tibet in 2016, and Celebrating Potala in 2017. Activities have included flag raising ceremonies, exhibitions, lobbying events and other creative actions. Globally, representatives have taken part in honouring this day and showing solidarity with Tibetans in Tibet. Students for a Free Tibet-India (SFT-India) organised “Majestic Walk”, a street show to commemorate the 107th anniversary of Tibetan Independence Day with the theme to highlight the Tibetan Cultural Resistance.
A public talk on Simla Convention 1914 was organised as part of the Independence Day celebration.
With this critical work of securing our past history, we are paving the path for freedom in Tibet, and shaping our future. To commemorate Tibetan Independence Day, a mega live concert is hosted this year on 13th Feb in Delhi. Not like any other before, we have hosted this concert in Delhi with some of the best Indian bands like Parikrama, Man. Goes Human, and also some of the international artists like Misty Terrace from Bhutan and Tenzin Seldon famously known by Tibchik from Netherland. There were also well-known Tibetan artists like Tenzin Mariko and many more.

This concert is organized to celebrate the Tibetan past and mark the important at the Tibetan historical date. At the same time, it was to raise awareness about Tibetan history to fellow Indians and the world at large. 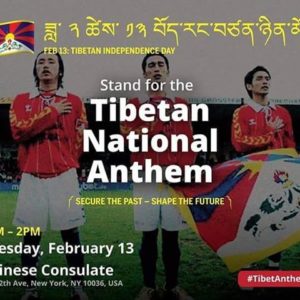 2018: STAND FOR THE TIBETAN NATIONAL ANTHEM

Feb 13, Tibetan Independence Day, with “Stand for the Tibetan National Anthem” as a theme to highlight the Tibetan people’s vision for a free and democratic Tibet.

Join us in our vision for a free Tibet—a place where Tibetans in Tibet and in exile will be united in freedom to proudly sing the #TibetAnthem in front of the Potala Palace. A worldwide commemoration of this day will help renew our spirits and hope for the return of exiled Tibetans to Tibet and the return of His Holiness the 14th Dalai Lama to his rightful place in the Potala Palace in Lhasa, the nation’s capital. 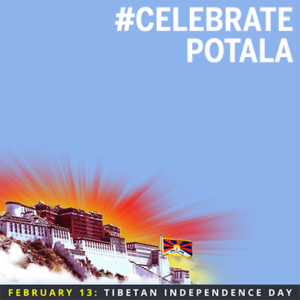 The Story of Tibet’s Potala: The World’s Highest Palace

HISTORY:  In the mid-7th century, Emperor Songtsen Gampo, the 33rd and greatest king of Tibet, laid the foundation of his palace on དམར་པོ་རི་ (Marpo Ri), or the Red Hill, in Lhasa after moving the seat of his government there from Yarlung. The completed palace was a nine-story white structure and named after Mount Potalaka, a sacred hill believed to be the mythical abode of Avalokiteśvara, also known as Chenresig, or the Buddha of compassion.

The additional construction at the Potala Palace that gave it the form that exists today began during the reign of the Fifth Dalai Lama in 1645-1648, around the time when the Mughal emperor, Shah Jahan, was building the Taj Mahal in India. In 1682, at the age of sixty-five, the Fifth Dalai Lama died. The new Potala Palace’s white structure was finally completed between 1690-1693 under the regency of Desi Sangye Gyatso, who had kept the Fifth Dalai Lama’s death a secret at his request.

The Potala Palace is considered to be the highest-altitude palace in the world, sitting at an altitude of 3,700 metres above sea level. The 13-story palace that towers over Lhasa has over 1,000 rooms and covers an area of over 13 hectares (32 acres). It was designated a protected UNESCO World Heritage Site in 1994 and named one of the “New Seven Wonders of the World” by USA Today in 2006. The Potala Palace is the most prominent manifestation of Tibetan architectural genius, and its designs are a testament to the builders’ scientific understanding of Tibet’s natural landscape and weather conditions in ancient times.

CAMPAIGN: 2017’s global celebration of Tibetan Independence Day was marked by highlighting the historical importance of the great Potala Palace of Tibet and the Tibetan people’s vision for a free and democratic Tibet. Today, PRC attempts to portray the Potala Palace solely as a tourist attraction. However, for the Tibetan people, the Potala Palace is much more than an attractive monument; it is a representation of Tibet’s independent past and a symbol of Tibet’s future statehood for Tibetans around the globe.

For centuries, the Potala Palace stood as the epicentre of the Tibetan political and spiritual world. Despite over half a century of PRC’s occupation, Tibetans in Tibet and those in exile continue to struggle for freedom and hope that they may stand together by the Potala Palace in a free Tibet. 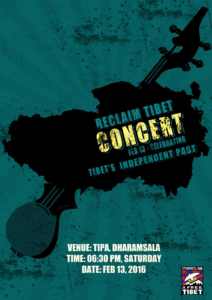 SFT commemorated Tibetan Independence Day with the theme of “#ReclaimTibet” to highlight the three regions of Tibet. PRC’s Tibetan Autonomous Region ignores the Tibetan provinces of Kham and Amdo. We highlighted how the 2008 uprising, spreading to all three traditional provinces, reasserted the territorial map of Tibet. In the face of China’s growing propaganda that distorts Tibet’s history and makes illegitimate claims to its land and its people, Tibetans inside Tibet continue to reclaim Tibet through their protests, stories, poetry, music, and art. A global commemoration of this symbolic and empowering history helped to renew spirits, reaffirm a global vision of freedom for Tibet and strengthen the Tibetan people’s struggle for freedom.

HISTORY: In the 7th Century, Tibetan Emperor Songtsen Gampo established Tibet as one of the mightiest empires in Central Asia with an army of 2,860,000 men. Each army regiment had its own banner. The banner of the གཡོན་རུ་སྟོད་ (Yon Ru Toe) regiment had a pair of snow lions facing each other; that of གཡས་རུ་སྨད་ (Yeru Mey) had a snow lion with a bright upper border; that of གཙང་རུ་ལག་ (Tsang Rulag), a snow lion standing upright, springing upwards towards the sky; and that of དབུ་རུ་སྟོད་ (Uru Toe) had a white flame against a red background.

The 13th Dalai Lama combined this imagery into the modern Tibetan National Flag. He declared that it would be the standard flag adopted by all Tibetan military regiments. In 1959, after the  People’s Republic of China’s (PRC) invasion, the Tibetan Government-in-exile instituted a ‘flag committee’ responsible for adjusting the snow lion flag in accordance with international standards after the second world war.

Today, in Chinese-occupied Tibet, possessing the Tibetan National flag results in imprisonment. Therefore, it has become a symbol of resistance against the PRC. The snow lion national flag has been carried by Tibetans inside Tibet in all major protests across Tibet from 1959 to the present day. In exile, Tibetans and supporters have used the Tibetan flag in their actions all over the world protesting the PRC’s occupation of Tibet.

CAMPAIGN: Tibetans and supporters participated in the #TibetFlagChallenge to make the Tibetan flag one of the most recognizable flags in the world in an effort to “secure the past and shape the future.” Through group and individual efforts, we made sure to organize countless flag-raising ceremonies, concerts, teach-ins and protest actions to commemorate Tibetan Independence Day. 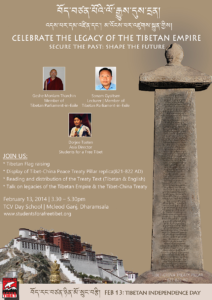 2014: CELEBRATING THE LEGACY OF THE TIBETAN EMPIRE

Tibetan Emperor Ralpachen signed a treaty with China in 821-822 AD with the intention of securing peace to bring improved prosperity and wellbeing to his people. He signed the treaty from a position of strength, presiding over the Empire near its greatest extent. The Chinese were happy to negotiate peace with the Tibetans.

The inscriptions on the stone pillar in front of Jokhang Temple in Lhasa are written in Tibetan and Chinese. The east face concerns the terms of the treaty and says with regard to the frontier near the present-day Gansu-Shaanxi border: “All to the East is the country of Great China, and all to the West is, without question, the country of Great Tibet.” The north and south faces record the names of the Tibetan and Chinese signatories. The treaty spells out that the countries were equals. The extension of their respective territories was established, and it was solemnly proclaimed that they had to be respected from that point on.During the Imperial period (early 7th century to the late 9th century), Tibetans gained control of a huge expanse of land and rose to prominence as a great civilisation.

CAMPAIGN: Tibetans and supporters across the world unfurled the images of the Tibet-China Treaty of 821-822 AD that clearly marks Tibet’s historical boundary with China. Together, we challenged China’s propaganda about Tibetan history and strengthened the case for Tibetan Independence on the global stage. 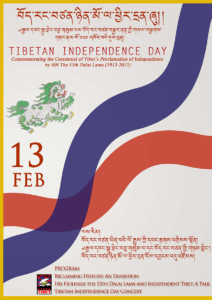 2013: The Centennial of Tibetan Independence

History  of Tibetan  Independence Day:  In  1910,  Manchu troops  invaded Tibet, prompting the  13th Dalai Lama to escape into  exile. In 1911, the Manchu Dynasty of China collapsed and Tibetans seized the moment to expel the Manchu troops in 1912. The Dalai Lama returned to Tibet and issued a proclamation restoring Tibetan independence on February 13, 1913.

CAMPAIGN: February 13, 2013 marked 100 years since Tibetans proclaimed the restoration of their independence. In over 30 cities worldwide, the centennial of the 1913 Tibetan Proclamation of Independence was commemorated with ceremonies, concerts, rallies, and public talks. Together, we put Tibetan Independence Day on the map.